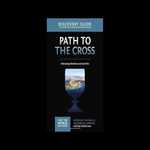 This year’s Lenten season began on Wednesday, March 6th. To prepare our hearts and minds during the Lenten season, the Adult Sunday School classes will be participating in a 5-week study called “The Path to the Cross”. These 5 faith lessons were filmed on location in biblically significant sites. They lead us to a better understanding of the path Jesus followed to the cross. You are invited to participate in this study beginning on March 17th at 10:00 a.m. in one of the following class rooms: