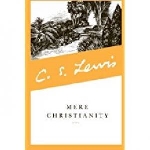 This book is a classic of modern Christian literature.  It is a collection of a series of radio talks given by Lewis in Britain during WWII.  In it he set out simply to “explain and defend the belief that has been common to nearly all Christians at all times.”  He carefully avoids any of the doctrines that divide denominations and focuses on, as he put it, “‘mere’ Christianity, which is what it is and what it was long before I was born and whether I like it or not.”

This is an excellent summary of the basics of Christianity and includes a number of insights that made me sit up straight.  It is not “light” reading; you will have to spend time thinking about what is being said.  But it is well worth the effort.  In it I found principles that help me keep focus on God in the midst of a world that doesn’t want to admit He exists.