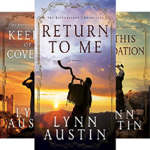 A colleague introduced me to the books of Lynn Austin several years ago. Ms Austin writes Christian historical fiction and has won Christy awards for a number of her novels. In the three books of The Restoration Chronicles, she brings to life the return of the Israelites from the Babylonian / Persian exile. The first story, “Return to Me,” tells of the first return to Jerusalem under King Cyrus, the travels and travails of the Israelites. The second story, “Keepers of the Covenant,” continues the story with the return of Ezra and the rebuilding of the Temple. The final story, “On This Foundation,” tells of Nehemiah’s return and the rebuilding of the walls of Jerusalem.

Ms Austin’s approach in these novels is to acquaint us with some of the central characters and their families and to develop their stories as they go about their parts in God’s plan. Her characters are alive and believable. Her plots follow scripture closely. Her descriptions of the life and culture of the characters benefit from her graduate study in Biblical Backgrounds and Archaeology. The stories gave me a better understanding of what was happening in and around the events described in scripture. This, in turn, helps me understand the message that the scripture is conveying. To borrow a phrase, I’ll never think about the return from the exile (or the story of Esther) the same way again.

So, yes, the fictional stories are well-founded and fact-based. But the best part is that Ms Austin is a great storyteller!

After years of watching his children and grandchildren wander from their faith, Iddo’s prayers are answered: King Cyrus is allowing God’s chosen people to return to Jerusalem. Jubilant, he joyfully prepares for their departure, only to learn that his family, grown comfortable in the pagan culture of Babylon, wants to remain.

Zechariah, Iddo’s oldest grandson, feels torn between his grandfather’s ancient beliefs and the comfort and success his father enjoys in Babylon. But he soon begins to hear the voice of God, encouraging him to return to the land given to his forefathers.

Bringing to life the biblical books of Ezra and Nehemiah, Return to Me tells the compelling story of Iddo and Zechariah, the women who love them, and the faithful followers who struggle to rebuild their lives in obedience to the God who beckons them home.